Celebrating Australia Day in the USA

It was Australia Day this week (January 26) – which is kind of like the American 4th of July holiday – and even though we’re here in the USA, we still like to celebrate it. This year, it was with Aussie style burgers for dinner, a pav (pavlova) for dessert and a video with Aussie words and American translations, which we filmed en route from Bradenton to Orlando the day before.

We had a lot of fun coming up with this list of Aussie words which made me (Julie) in particular realize… even though we officially speak ‘English’, speaking Oz-Strayl-yan (Australian) really is like a whole other language. We’re heading Down Under in mid March for a month so it was also a good opportunity for Marc to polish up on his knowledge of Aussie words, and for me to prove to my friends and family back at home that while I may have become Americanized in the seven (7) years I’ve lived here, I’m still an Aussie girl deep down and I haven’t forgotten how to speak the lingo. I have to say, I am extremely impressed with Marc’s recollection of the meaning of all these words – he’s starting to sound like a true blue Aussie bloke!

Anyway, here’s the video, which should give you a laugh – or at the very least have you shaking your head in absolute confusion and disbelief that we actually understand what the other is saying.

On Monday night (January 26 in Australia) we invited some Oregonian RVing friends over for dinner to give them a real taste of Aussie tucker (Australian food). That is, Aussie style burgers with a hamburger meat patty, grilled onions, lettuce, sliced tomato, a good dollop of tomato sauce (ketchup) and the magic ingredient – sliced beetroot (beets) on a toasted bun. De-lish!

That’s the simple version – we’ll often order them back at home as a burger ‘with ‘the works’‘ which includes grilled pineapple, bacon and a fried egg and a slice of cheese. It all gets a bit messy, but it’s totally worth it! 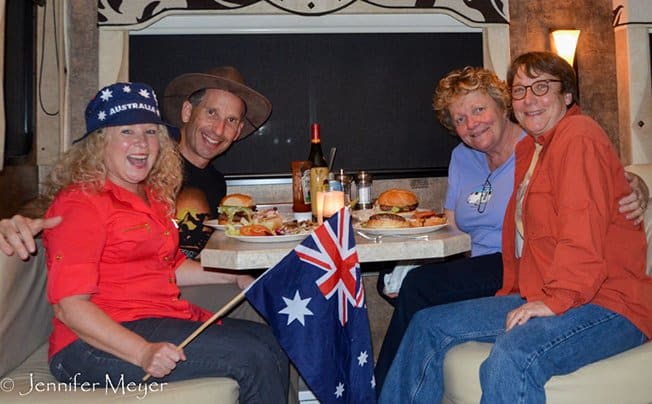 We finished up with a home made pav (pavlova) for dessert, decorated with raspberries, blueberries and kiwi fruit. In fact, this is the first pav I’ve ever made from scratch, so it’s quite funny to me that my first ever pavlova was concocted in an RV convection oven while living in America. Having enjoyed many a pav in my day, it didn’t turn out quite as well as I had hoped, but Marc and our friends Jennifer and Kate were none the wiser and loved it anyway. Yes, we ate the whole thing in one sitting! Fortunately, it’s a pretty light dessert, made with a crunchy meringue base topped with whipped cream and fresh fruit. Pretty easy. But I think I need to keep practicing to master it to the level to which I am accustomed back home in Australia. 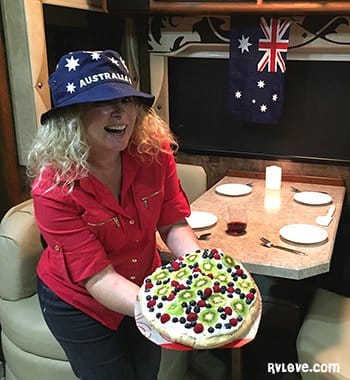 We played the “Australia Day” music mix on Pandora in the background while we ate, drank, laughed and shared a few crazy Aussie words with the girls from the video. It was hilarious watching their expressions, which ranged from complete bewilderment to concern as they seriously wondered if they would ever be able to visit Australia and understand the locals.

Don’t worry, we don’t all speak like that all the time – at least not in the cities. But we do use a good number of these words in everyday conversation.

As I said to Marc in the video:

“You can see why people get confused by the Australian language… I get confused by it sometimes…still. Not really. I know what people are saying – it’s in my blood mate!”