What Does a Year of Full-Time RVing and Travel Cost?

It’s been a year since our last financial snapshot and so here’s an update on our RV lifestyle and travel expenses for 2016. It was quite an eye opener, with the numbers coming in around 50% higher than the year before. In this infographic, we share the reasons, along with our total miles traveled, nights stayed in a variety of locations, what we spent on campgrounds, fuel, repairs, insurance and other non-RV related travel.

Watch the video recap here – against a full moon in Sedona, AZ – and/or just scroll down to keep reading.

Of course the important thing to note here is the costs related to a life of RVing and travel can widely from year to year and from person to person. Variables can depend on your type and age of RV, how you travel, the pace at which you travel, your standard of living, fuel prices and so much more! So please keep that in mind.

Also note: We have NOT included our RV monthly payment, grocery/eating out and entertainment expenses, as these are all totally variable depending on your own personal preferences and budget. But we hope you find the data we’ve shared in this infographic interesting and useful as a guide. We’ve included some additional commentary, observations and explanations below the image. 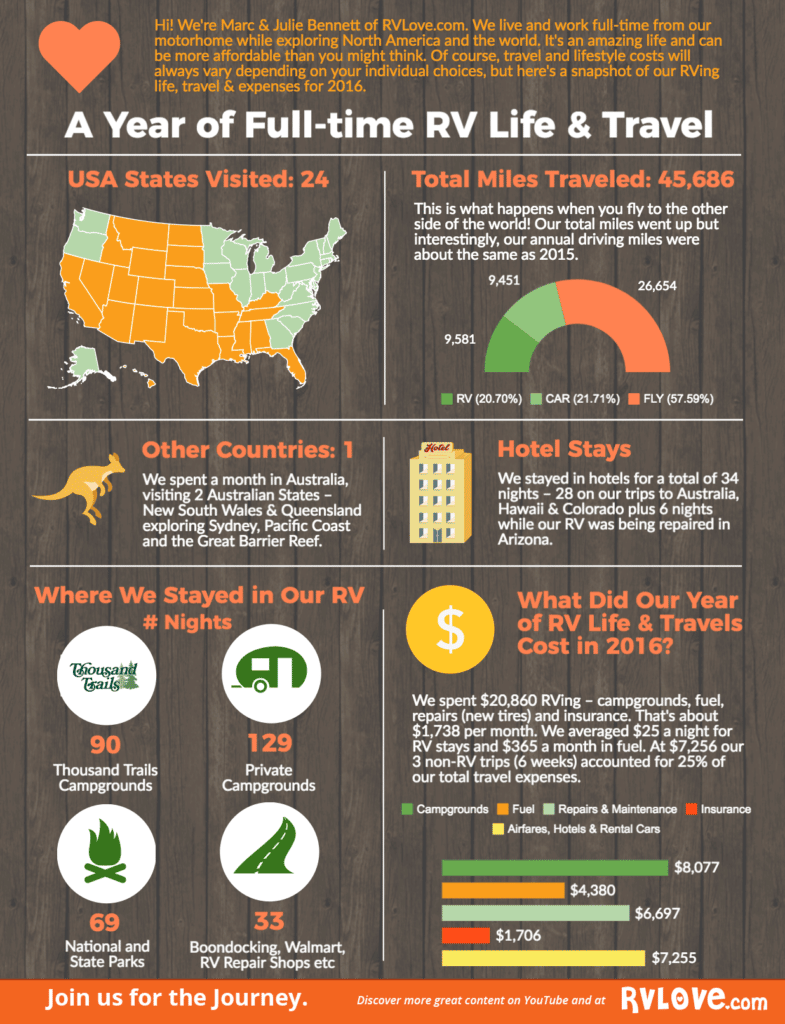 Go Big Or Go Home...Better Yet, Do Both!

The big picture is in our opinion, we went REALLY BIG in 2016, spending about double on our travels compared to 2015.  But boy, did we have an AWESOME time. And yes, we did go home – both to Colorado and Australia.

We spent about $28K for the two of us (compared to $14K in 2015) after including our trips to Australia, Colorado and Hawaii (5 weeks all up). However, once we exclude the 2 off-shore trips, that brings our RV travel expenses down to about $20K. Of course, had we spent those 5 weeks in mainland USA instead of Hawaii or Australia, our expenses would have probably been more like $21K (instead of $20K), so let’s call it about a 50% increase. This is a more accurate comparison if you only want to consider RV travel related expenses.

There are good reasons for the higher costs, which we’ll cover as we continue.

Our campground expenses were substantially higher – almost 50% higher in 2016 costing $8,077 vs $5,645 but this didn’t come as a surprise either. We knew when we were planning our 2016 travel itinerary that we would be spending a lot of time in the middle of the country, where our camping membership through Thousand Trails (TT) doesn’t have much of a presence (or any).

As many of you know, we try to spend as much time as possible in TT parks because it saves us SO much money, especially as full-timers, but in 2016 we spent a mere 90 nights in TT campgrounds – less than half the time we spent in 2015 (189 nights). And that came at a price of course, being an additional $2,432 (which averages out at about $25 a night.)

We spent a similar number of days in private and membership campgrounds outside of TT, and about twice as many in State and National Parks, which was fantastic!

We also did more boondocking and dry camping in 2016 than we did in 2015. We feel so much more comfortable doing this now, with a lot more experience under our belts, so 33 nights up from 20. This included overnighters at Walmart and rest stops, the Albuquerque Balloon Fiesta plus a few nights dry camping at an RV service center waiting to get repairs done!

Of course, flying some 26,000+ miles skewed our overall total, but interestingly, our driving miles were very similar to the previous year.

In 2016, we traveled to 24 USA states instead of 33, yet drove 9,581 miles in the RV – an extra 1,173 miles than 2015 when were on the east coast where states are smaller and closer together In 2016, we drove through more of the bigger states in the west like Montana and all the way up to North Dakotas (the lone state often missing from the state sticker maps of so many RVers… haha not ours!) and of course, there were many miles to drive across Kansas and Texas! Oh Texas, you are SO big!

We drove 9,451 miles by car – which includes miles in the MINI as well as rental cars in Australia and Hawaii. We felt it was fair to include those, as if we hadn’t been there, we would have been driving somewhere else back in the USA. But overall, our regular vehicle miles were lower than the previous year, coming in at an average of just under 800 miles a month, compared to 950.

If you combine our RV and car driving miles, that comes to just under 20K – and we drove 24 states in the USA (almost half the country) plus 2 (big) states in Australia.

Now just think about that for a minute – the average American drives around 13,476 miles per year, according to the U.S. Department of Transportation Federal Highway Administration (FHWA) and most households probably have 2 vehicles which would easily take that total number to over 25,000 miles. And most of these miles are done commuting to and from work. Not traveling and exploring. Hmmmmm.

Not surprisingly, because we drove around the same miles as last year and fuel prices have been reasonably stable, our fuel expenses came within $100 of the year before, coming in at $4,380.

Our wallets took a much bigger hit in 2016, but it wasn’t entirely surprising. We were planning on replacing our RV tires in 2016 as our coach is a 2012 model (2011 chassis) and therefore 5 years old, so it’s no under a factory warranty and of course, the older your RV gets, the more you’re going to need to expect to spend on repairs and maintenance.

All up, our Repair and Maintenance costs were more than 3X the year before at $6,697 (and would have been even higher if it wasn’t for our extended service contract). Over half of our overall R&M expense were spent on putting 6 new tires on the RV on replacing 2 tires on the MINI ($3,456), which we classify as maintenance rather than repairs.  We also upgraded our RV suspension with Sumo Springs, which made a huge improvement to the drive and handling of our gas coach, that was another $1,450 – entirely optional.

In May 2016, we took a trip to Tiffin, our coach manufacturer, and had a great experience there. We spent under $500 and had a ton of work done for that – repairs and even some body/paint work. You can read more about that here.

Other repairs and maintenance are detailed in this 2-part blog post/video, which cover the 3 breakdowns we had in November! See Part 1 here and see Part 2 here.

As per usual, our insurance premium renewal arrived and was higher than the year before – by  a few hundred dollars! I called our insurer and they offered to run our credit score which, lo and behold, this resulted in a premium reduction. It definitely pays to make a call, as our insurance costs actually went down to just over $1700 for our combined RV and MINI policy, compared to $2,100 in 2015.

All up, we actually spent 67 nights outside of our RV (just over 2 months) which is why this post and Infographic is not just about our RV life, but our RV Life and Travels. Our plan is to keep on expanding our travels internationally, while maintaining our RV in the USA as our ‘home base;.

Our accommodations includes a combination of very nice hotels (Australia, Hawaii and Colorado) plus freebie stays with family and friends (in Australia). We included the cost of our non-RV travels under Airfares, Hotel Stays & Rental Cars at the very bottom right of the Infographic.

These came to a total of $7,255 which may sound like a lot, but remember that’s for 6 weeks for 2 people and includes a long haul international flight, plus 2 others domestic ones. Because our stays with family and friends were free and our trips to Hawaii and Colorado were heavily subsidized by using frequent flier miles/points, these travel expenses were actually very reasonable for what we got, as we stayed in really nice places and we have a high value on cool cars. We rented a Mustang to drive all around Maui in December and it was 100% paid for by points we earned from our credit cards.

Typically, we like to keep on top of our expenses on a monthly basis, but 2016 was such a hectic year of life, work and travel that we fell off the wagon with that routine, so it ended up being a huge job to go back and compile the data, over the past few weeks for this blog post.

Overall, while even WE were surprised at how much more we spent on travel in 2016 compared to the year before, we remind ourselves that it’s still not unreasonable for such a huge amount of travel and amazing experiences. The amount we spent was within our means, travel is high value for us and this expenditure is still comparable to a “normal life” with a mortgage, 2 cars and the associated expenses.

We also hadn’t been back to Australia to visit family for over 3 years so that trip was overdue and we scored bargain flights that we simply couldn’t say no to.. Now that we’ve covered all of the lower 48 USA states plus Hawaii, we’ll be slowing down our pace in 2017 and the years ahead.

When you’re in your first few years on the road as an RVer, there’s just something about wanting to hit every state you can, especially when you have one of those darned state sticker maps on the side of your RV! We continue to love this lifestyle and it’s exciting to think we’ve covered every state now, except for Alaska – all while working full-time. We plan to explore the last frontier in 2018.

So, now we’d love to hear from you!

26 thoughts on “What Does a Year of Full-Time RVing and Travel Cost?”