We mixed up our two weeks at Miami Everglades RV Resort.  One week we stayed in the resort, and one week we left our RV in storage while we went on a cruise.  This is one of the nicest resorts we have stayed in as part of our Thousand Trails, and Trails collection memberships.  The RV park was awarded best campground in Miami back in 2010, and is still a great park today.  Read on for more about our experience.

As the name implies, Miami Everglades RV Resort is located 30 miles south of Miami, and 30 miles north of Key Largo Florida.  Coral Gables is directly east, and the Everglades National Park is only 10 miles to the west.  Publix grocery store and fuel stations are only about 10 minutes away.  Farms and nurseries surround the RV park on all sides, which makes the resort feel more distant from town than it really is.

Roads into the area are flat and straight for RVs. But, the last couple turns will sneak up on you if you don’t have a GPS, especially at night as it is dark in this rural farming area.  Being in southern Florida, this is a great place to visit if you want to escape the cold winters up north.

Miami Everglades RV Resort has a lot of desirable attractions in close proximity.  It is less than 30 miles from both Key Largo, and Miami.  Coral Gables Miracle mile, and Oceanside communities are a short drive away. The Everglades National park is only 10 miles from here.  Nature, shopping, entertainment and most anything you could want is less than an hour from this resort.

We make the most of the fact that Miami is a major cruise terminal, and sailed away on a vacation.  Miami Beaches are very popular, as is the art deco architecture.  There is a lot of culture in Miami.

One interesting area we heard about while down here was a town called Wynwood.  The town is filled with spray painted murals.  Certainly a lot to experience in this area.

Miami Everglades RV Resort  has fantastic amenities.  The pool area is one of the nicest we have experienced in an Encore resort.  It had a beautiful sand volleyball court, and extremely nice mini-golf area.  There was a basketball half court, pickleball, and shuffleboard courts in excellent condition. This resort also has a massive grassy play field and open areas.

On the more practical side, there were multiple shower buildings, a laundry room, propane fill and a small store onsite.  There is also a really large Tiki hut for large get togethers, and a clubhouse for indoor events. This park also offers a large storage area for RVs.

We noticed that this seemed to be a very social resort.  Our perception was that there was an event nearly night.  When we mentioned that to a long term resident, they confirmed that there usually IS something most days.  Great energy and fun group of people during our visit.

We were able to receive packages here during our stay.  Catering to long term tenants, we imagine they are used to receiving deliveries for guests.

The RV sites are mostly grass, but some are dirt or hard surface.  Internal roads are all paved asphalt surface and in good condition.  The check in office has two lanes and is well within the park. The roads in between sites are not wide, so hopefully you don’t end up having two RVs meeting on a road at the same time.

Fortunately, since the majority of the visitors seem to be seasonals, there isn’t as much changeover of sites as you might find in short stay parks.  Having fewer RVs driving around makes the roads seem totally fine.  It also helps that the vast majority of the sites are pull throughs, which makes it easier to get in and out of sites. This of course means less time where the roads are blocked.

There are about 275 sites, and most RV sites seem to be extended stay or seasonal visitors. The resort has about 15 cabins and lodges, but nearly all sites are for RVs.  Group tenting sites, and solo tenting sites are also available.  Most of the RV sites are full hookup. About half being 30 amp, and the other half 50 amp power.

When we arrived, the regular full hook up sites were all full. They asked if we would be ok staying in a group tenting site without a sewer hook up for a night, then move into a regular site the next day.  We actually loved the partial hookup site so much, that we chose to stay there all week.  Fortunately, our water tanks are large enough to comfortably go a week without dumping.

Most of the regular sites are large enough for big RVs, but are not super wide.  I would say they are about average for what we see in Florida RV parks. Some are larger than others, and if you can score one on the perimeter they will feel very spacious. There is a really nice paved walking and biking path that goes all the way around the park.  The park is about 34 acres, so the path is a wonderful way to get in your exercise.

As mentioned above, one of our weeks here was while we left our RV in storage.  We had booked a cruise out of Miami. So this was a great place for us to store our coach while we were sailing the Caribbean.  It was also a great opportunity to test our batteries, since the storage is just open area with no power.

We were gone for seven days.  It was raining when we left, and raining when we got back.  Our RV was also partially shaded by a tree, and it was the heart of winter.  I am sure that we had some sun while we were gone, but not much.  We have 1000 watts of solar panels, but with the weather, the season and the shade tree, solar potential was low.

We have a residential fridge, and still had a fair bit of food in it.  So, we just left it on, crossed our fingers and banked on the batteries to get us through.  It was exciting to see that we still had 20% of our power capacity when we got back 8 days later.  We love our system for peace of mind in situations like this.  We have 6 Battle Born Lithium batteries, and Victron solar charge controller and inverter.  Click here to read our post and related video about our off grid set up.

Being a special Encore resort, this is one of the few parks within the Trails Collection that requires a $20/night fee. Most sites were seasonal or extended stay residents.  We did meet a number of folks staying here for shorter stays.  But the focus is likely on long term/destination visits.

Miami Everglades RV Resort is a really great destination resort for a season.  It is also a great getaway resort for shorter stays if you live in the area.  It feels like it is far from town, but is actually very convenient to big city attractions and even the Florida Keys. It is one of the best parks we have stayed at within the Encore system. Very impressed with maintenance and quality of the resort and a very good location

We visited this resort in late January / early February of 2019 for two weeks.  We stayed in the park for a week, and left our RV in storage for a week.  The weather during our stay was beautiful, with daytime highs in the 80s and night time lows in the 70s. We had a really nice time here and would definitely come back to visit.

To find out more or to make a reservation, contact:

Editorial Disclaimer: Opinions expressed here are the author’s alone, not those of any campground, RV park or RV resort, and have not been reviewed, approved or otherwise endorsed by any of these entities.

Looking for more RV parks in this area? Hover over each image to see campground and location and click to read our review. Find ALL of our campground reviews on this page. 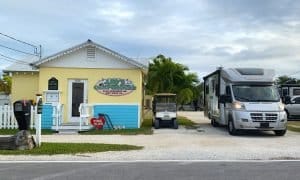 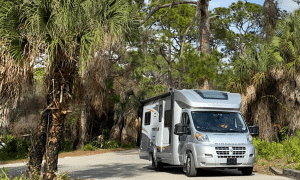 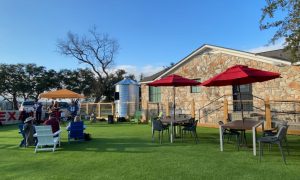 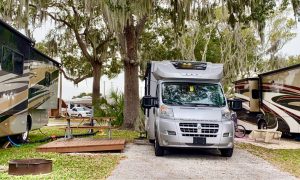 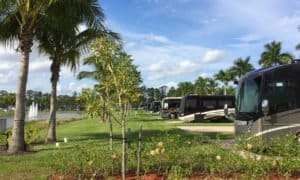 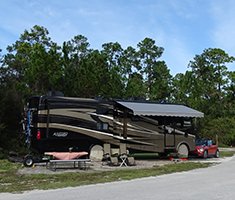