With our RV and MINI – Rocky and Juice – safely situated at McCormick Place, it was time to get out and discover for ourselves why so many people make the claim “Oh, Chicago is my favorite city!” To avoid traffic, hassle and additional parking fees for the MINI, we opted to explore the city by bicycle, as suggested by Jason and Nikki Wynn (thanks guys!) So we packed a backpack, slathered on sunscreen and jumped on our very own tandem bike to head downtown and check out as many thing on our “Must See” list as possible – in one afternoon/evening! 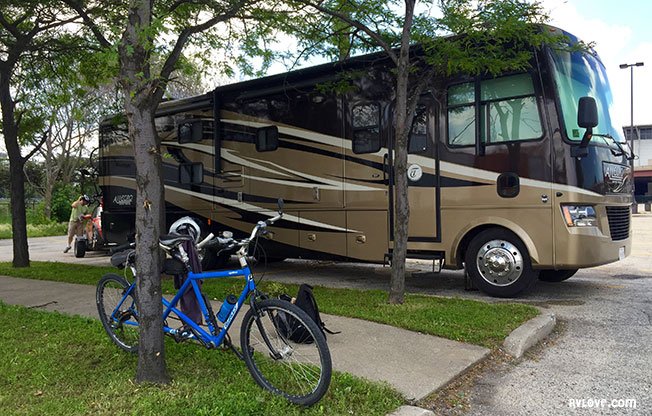 We didn’t really know too much about the city before visiting, so were interested to learn these interesting facts about the iconic Windy City:

Here are the highlights of our Chicago expedition, in the order we experienced them.

It was a gorgeous day, blue skies and sunny and by 2pm it was already a very hot 95 degrees F (35C)! Within five minutes of leaving McCormick Place, we were already on the Lakefront Trail (LFT) which runs alongside Lakeshore Drive – a beautiful, wide, paved 18 mile (29km) trail that follows the shoreline all the way from the south into north Chicago – and were passing by boats in the marinas, beaches, grassy parks and people enjoying a day outside…walking, biking, swimming and picnicking.

As we pedalled toward the city we were struck by the contrast of the striking city skyline on our left and the vastness of the glorious blue-green hues of Lake Michigan on our right… and the smooth, winding bike path ahead of and below us. It was a great ride, surprisingly beautiful at every turn and all up an easy 15-20 minute bike ride downtown. 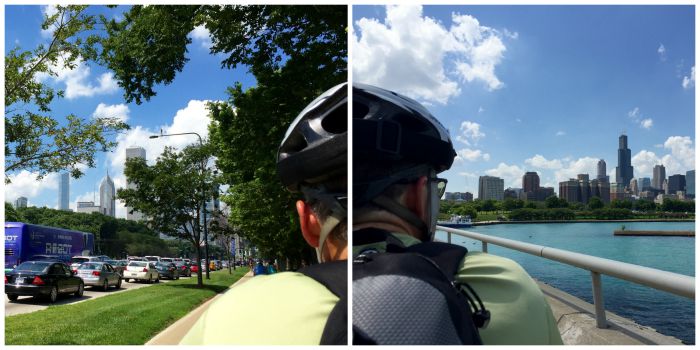 This was recommended by locals we’d met at our campground just a few days earlier so we decided to start there. We locked up the bike (there’s ample bike parking) and walked to the end of Navy Pier, taking in the sights of Lake Michigan, the lighthouse, a tall ship and other boaters out enjoying the day. 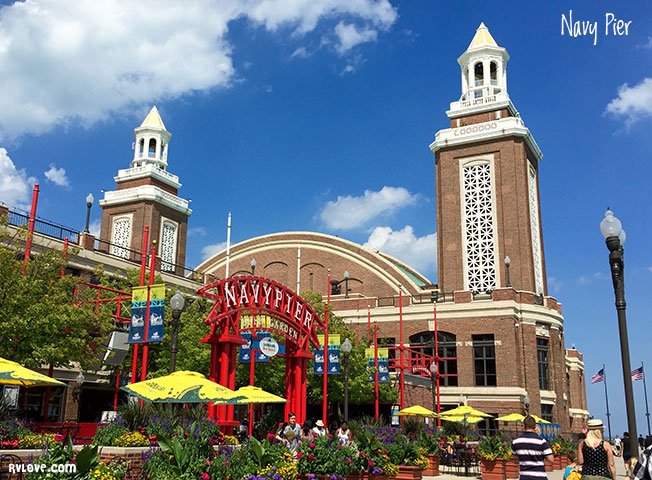 Navy Pier features a small amusement park, a few restaurants, shopping, a theater, panoramic views of the lake, boats, sightseeing tours and lighthouses to gaze at. Surrounded by so many people relaxing and having fun, we almost forgot we were in the heart of a major city! As we walked right around Navy Pier, we were even impressed at the number of beautiful, flower-filled planter boxes that lined the street, attracting dozens of monarch butterflies and we even got a close up look at a huge bumble bee – probably the last thing we expected to see in the heart of a big city like Chicago!

While visiting Navy Pier, I (Julie) suggested we ride the Navy Pier Ferris Wheel – figuring it would offer a great aerial view of the Chicago skyline and Lake Michigan and bring back some fun memories of when I was a kid. Little did I know it was Marc’s first Ferris Wheel ride EVER… oh yeah, that sealed the deal, we just HAD to do it! 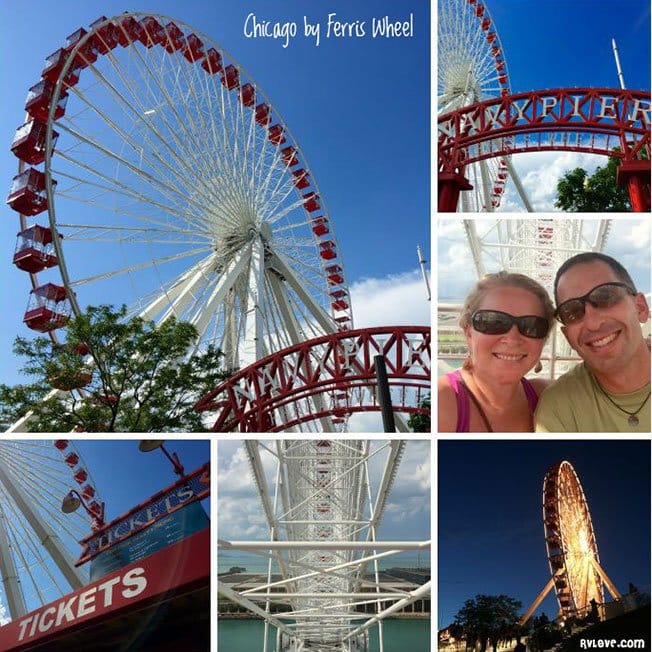 Did you know the world’s first Ferris wheel was erected in Chicago in 1893?

While this isn’t the original Ferris Wheel, it was a fun and relaxing ride. The cost was $8 each for a single 7 minute loop and it’s open year-round, weather-permitting, alongside other outdoor attractions such as the Carousel, Wave Swinger and The Links Mini Golf which all operate spring through fall.

A short 10 minute bike ride later, we arrived at the casually sophisticated, lush green Millennium Park where we took a long, leisurely stroll around, taking in the state-of-the-art architecture, landscape design, sculptures and art displays that provide the backdrop for the city. It’s very much like a lively town square style gathering spot and a popular destination for Chicagoans and visitors alike. Millennium Park is located within the 319 acres that is Grant Park (known as Chicago’s front yard) in Chicago’s central business distract and offers hundreds of free cultural programs including concerts, exhibitions, tours, and family activities. It’s definitely a place we’d allow more time for on a future visit. 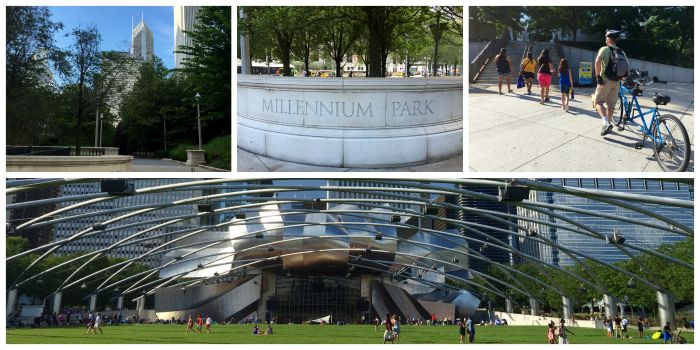 Did you know Millennium Park is the largest greenroof in the world?

At 24.5 acres, Millennium Park is the result of a $490 million transformation of a former dilapidated parking lot and railyard in Grant Park and this greenroof project now covers two multi-level parking lots with a total of 4,000 cars, a commuter rail line and an opera hall. It’s a beautiful example of how cities can transform industrial space into natural and artistic environments that can be enjoyed by millions of people – whether locals or visitors from around the world – it’s well worth a visit!

5. Walking around, under and through the Giant Silver Bean

We had heard the famous giant silver bean was a must see but weren’t quite sure why – or even what it was – until we got there. In fact, it wasn’t until I started writing this post that I learned this extraordinary sculpture by British artist Anish Kapoor is officially called “Cloud Gate”(honestly, it’s the first I ever heard of that) but it seems everyone simply refers to it as the Giant Silver Bean. No wonder I had trouble finding much info when I googled “Silver Bean Chicago” – I completely bypassed all references to “Cloud Gate” as I didn’t make the connection! 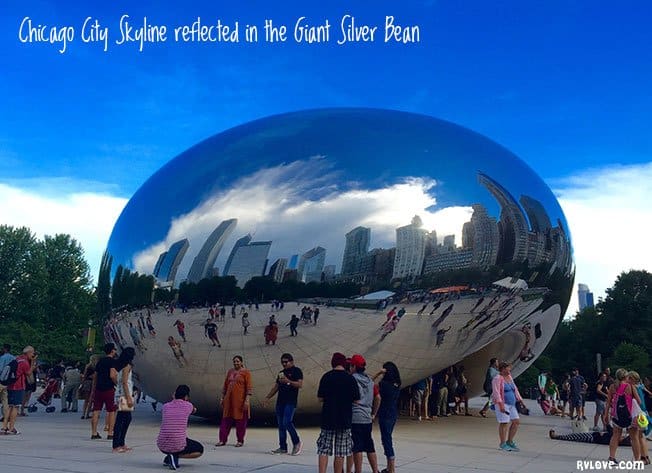 A little bit about this sculpture and what makes it so impressive. First, it’s huge – measuring 66 feet high by 33 feet high and weighing at 11o tonnes, it’s among the largest of it’s kind in the world. Second, it’s a very cool design – inspired by liquid mercury, it’s an elliptical structure that was created from a seamless series of highly polished stainless steel plates to create a mirror-like surface. You can walk underneath/inside/through the “bean” where you will discover a 12-foot-high arch that provides a “gate” to the concave chamber beneath the sculpture. Naturally, everyone around and inside the bean is fascinated by seeing their image reflected back from a variety of perspectives (like us in the photo bottom right). Third, the sculpture is strategically placed to reflect the Chicago city skyline and clouds above, which is quite spectacular. As you can see, “Cloud Gate” aka the Giant Silver Bean is popular with tourists and attracts a crowd pretty much any time of day. It’s certainly beautiful and well worth seeing in person.

By this time, it was 5pm and we’d worked up a good appetite after all of our activity so far. The great thing about a city as large and diverse as Chicago is the sheer abundance of cuisine and restaurant choices available. Of course, Chicago is famous for its steaks and deep dish pizzas but on this particular Friday, we were in the last 3 days of a 14 day detox/cleanse!!! Aaarghhh! Boring right!? Not necessarily! We were committed to seeing our detox through to the end (no sugar, alcohol, gluten) and managed to find a terrific Asian fusion restaurant on Yelp called Flat Top Grill where we had a delicious healthy stir fry to fill our tummies and loads of water to quench our thirst after a big day of high temps, high humidity, biking and walking.

Satiated, it was time for our next adventure!

7. Cruising at sunset on the Architecture River Boat Tour

This tour was recommended to us by several people so we decided to finish our day with a boat ride on the Chicago River to get a bird’s eye view of some of the most beautiful architecturally designed (and a few of the ugliest) buildings in Chicago. There are a couple of tour companies that offer the Architectural River Boat Tour and we decided to go with Shoreline Sightseeing which has a ticket kiosk and launch area conveniently located right at Navy Pier. The tour length was 75 mins and cost $35 each for adults plus the city’s “amusement tax” which came to $39.20 each. 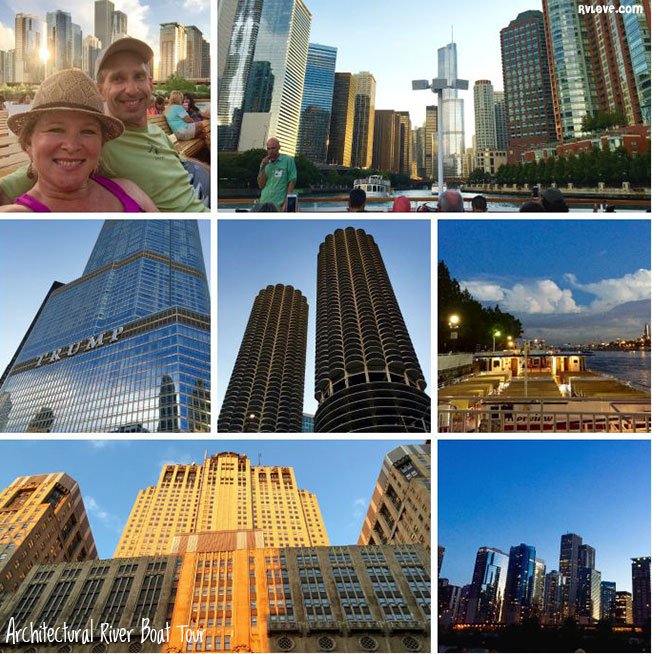 Being such a hot day, we’re really glad we opted for the 7.30pm tour as it gave us time to explore the city by day then cool off and relax in the evening after dinner, cruising the river while listening to our tour guide/docent Ben who shared the backstory, history, facts and figures of these imposing structures that represent the era in which they were built. From the 1920s to the 1970s and 1980s, right up to the new skyscrapers currently under construction it was a fascinating look back in time and into the future while gaining a deep appreciation for the city, it’s many challenges and how the people of Chicago overcame them. Among the 40+ Chicago landmarks featured on the tour were Tribune Tower, Wrigley Building, Trump Tower, Marina City and the Civic Opera Building. The Architecture River Boat Tour is truly an insider’s glimpse into the buildings, architecture, and engineering that made Chicago famous as the birthplace of the skyscraper and home of modern American architecture. 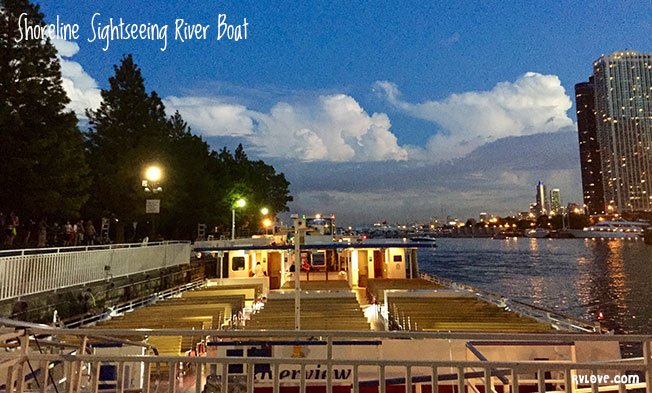 Did you know in the Great Chicago Fire of 1871 some 17,500 structures were destroyed?

It really was ideal starting the tour during daylight and after the heat of the day had started to subside, as we also got to enjoy watching the sky changing color at dusk, before returning to the dock to witness the Chicago city skyline sparkling against the evening sky backdrop. 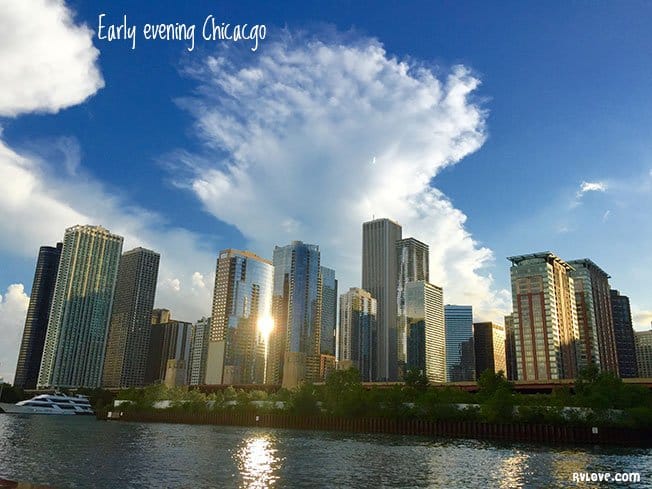 Being a hot summer Friday night, there were plenty of people out and about making the most of the balmy evening – couples, families, after work resellers, bachelorette parties, tourists and singles all dressed up to the nines and ready for a big night out on the town. After such a big day, we weren’t up for any partying but we wanted to drink in the city just a little more before heading back to the coach. We walked to the end of Navy Pier once more, loving the temperature and atmosphere, people watching, the shimmering lake and enjoying the city lights and buildings as they sparkled against the dark night sky.

By 9.30pm, we were back on our trusty tandem bike and headed back to McCormick Place via the Lakeside Trail – the trail was well lit and by 9.50pm we were safely back at the coach.

We were reminded why traveling by RV is truly such an incredible way to experience, embrace and explore all this country has to offer – getting up close and personal with big cities, major landmarks and national parks to quirky small towns, unexpected backroads and bizarre roadside attractions – it’s such a richly rewarding way to appreciate so many gems and especially, the many ways of life and living for all kinds of people all around the country.

And yes, I am determined to help Marc replace his unfavorable memories of big city business travel with some fun and memorable personal experiences. Chicago? Check. It’s one of the best days we’ve had recently (though truly, so many are awesome in their own ways) and we would definitely return! We did miss the Chicago Art Museum this time which we’ve heard is meant to be fabulous. Oh well, it just gives us another reason to go back 🙂 Well, goodnight Chicago… you were even more delightful than we imagined. Until we meet again….

Have you been to Chicago? What were your favorite things to do, see and experience? We’d love to hear your comments!

6 thoughts on “Chicago by Bike, Ferris Wheel and River Boat!” 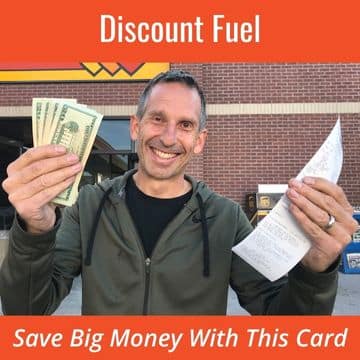 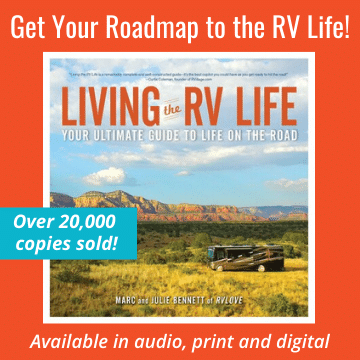 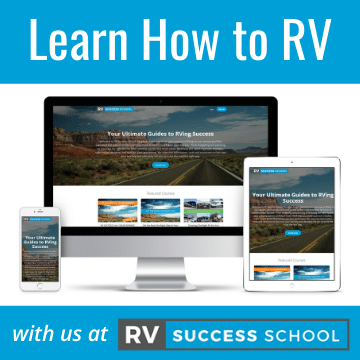 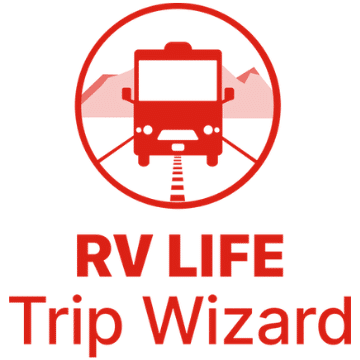